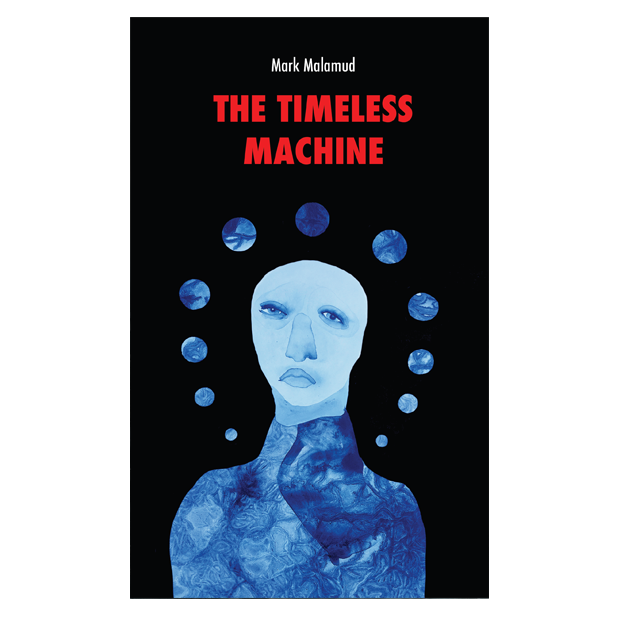 The Timeless Machine (Mark Malamud) — The place is Richmond, a suburb south-west of London. And something terrible—or wonderful—has happened. An English scientist, known only as the Time Traveler, has invented a machine.... An entertaining fusion of Victorian certainty with postmodern doubt, The Timeless Machine rewrites H. G. Wells’ original novella to explore the limitations and contradictions of living with grief. What starts as a classic science fiction adventure twists into a parody of The Time Machine—and then a satire of rationality, an exposé of loss, and a existential meditation on the necessity of fiction.   ☆   "It's nearly impossible to find a new take on time travel. This is it." (Nina Corner, ECFP)   ☆   “A curious yet touching story about grappling with one's grief.” (re/ART)   ☆   “[The author] appropriates the setting of Wells' Victorian-era The Time Machine to tell a story less mechanistic and more complex—namely, in a world of endless and inevitable loss, how do we deal with grief?” (Jane Baker, The Letter Column)   ☆   “H. G. Wells, Robert Coover, and Jorge Luis Borges walk into a bar. This is the story that might come out.” (Natalie Warren, Word Count)   ★  Paperback and digital download   ★   Available Now. 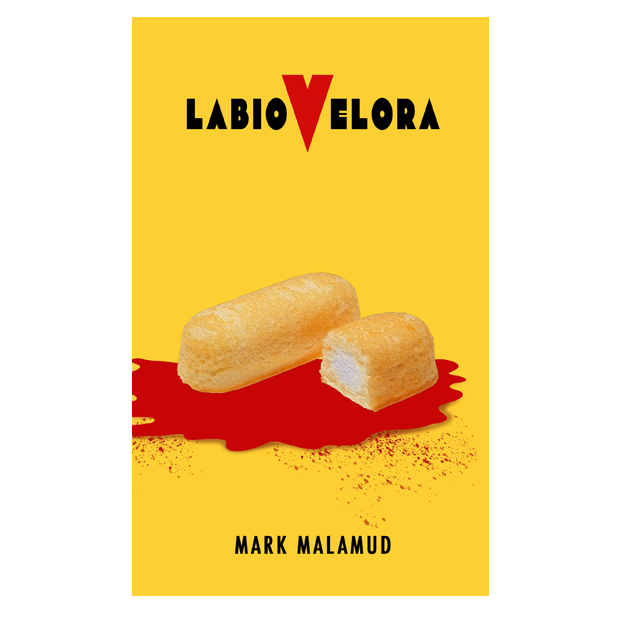 Labiovelora (Mark Malamud) — "The time of our birth is tattooed on our left forearms, time corrected by the Equation of Time. I was born in Frost and Folly in the Summer of August, in the year 2007. I was born at six in the Labiovelora. I was given the miscegenation pattern when I became a woman. I was ten years old...."   Between the end of one day and the start of the next, there are twelve hidden hours, an interval perceived only by those born during midnight’s midnight, also known as the Labiovelora. But those twelve hours are fragile, and it’s up to one young woman—and the insatiable monster she carries inside her—to keep the Labiovelora safe. Set in Providence, Rhode Island, a city that despite the best efforts of upscale marketers is still best known for H. P. Lovecraft and Buddy Cianci, Labiovelora is a nightmarish tale of survival and sex, where it turns out that what you don’t know can hurt you. And you know so very little....   ☆   "Darkly comic, frightening, and uncomfortably sexy." (Ingrid Bell, Nomenclature)   ☆   “A propulsive narrative that takes you straight to hell.” (Iron Press)   ☆   “Surreal and provocative, Labiovelora peels back the veneer of our unknowable reality to reveal...something far more disturbing.” (Seamus Grosse, Dormouse Review)   ★  Paperback and digital download   ★   Available Now. 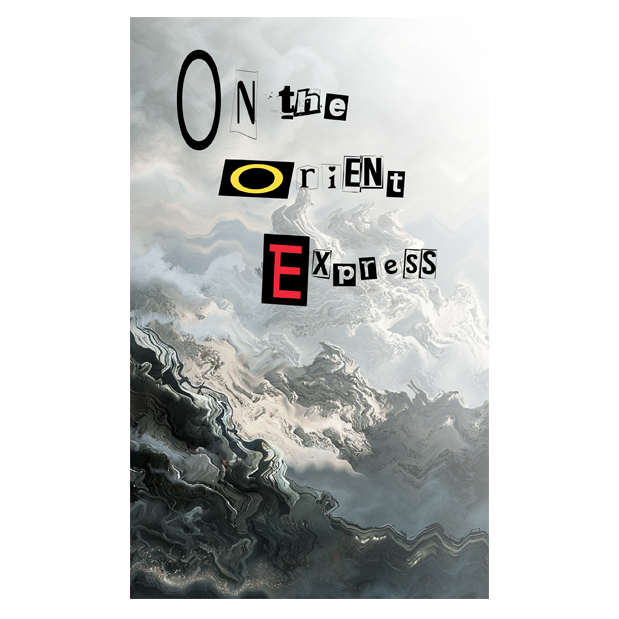 On the Orient Express (Mark Malamud after Agatha Christie) — A daring act of narrative appropriation, modification, and reinterpretation. By altering an event early in Christie's novel — there is no murder — the remaining text must adjust to accommodate the absence of the crime. The result is a transformation of the original novel into something entirely different: an expression of redemption rather than of revenge.   ☆   “A startling whodunnit that summons the better angels of our nature. The transformation of Christie’s text is simple but ingenious.” (re/ART)   ☆   “By touching the text as lightly as possible, Malamud guarantees that many — if not all — of the core elements that make Christie’s work so satisfying are still there: the characters, the puzzles, the ratiocination, the dénouement. And yet there is no murder. What, then, is the necessity of that brutal crime? Who is Christie—and who are we—to embrace such casual slaughter?” (Dahlia Loup)   ☆   “It's as if someone returned from an alternate universe and handed you a copy of Christie's alternate novel.” (Marta von Baugh, Verbal Helix)   ☆   “A fascinating way to think about the reading (and writing) of classical texts.” (Jean Guile, The Republic of Words)   ★   Signed Limited First Edition available only from Regulus Press. Standard Second Edition also available.

Literary taxidermy is an experimental writing process. It involves taking the first and last lines of a piece of writing (often a novel, but sometimes a short story) and then using those lines as the beginning and ending of a new, original story or poem. Learn all about literary taxidermy published by Regulus Press. 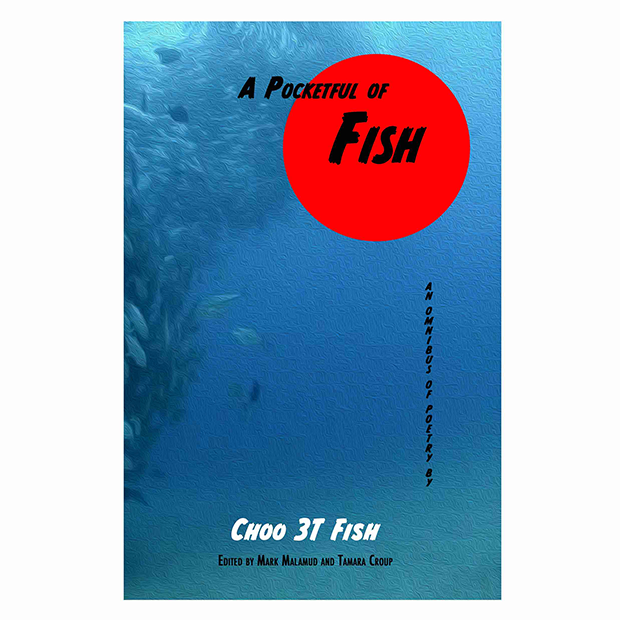 A Pocketful of Fish (Choo 3t Fish) — A seaworthy celebration of contemporary literature, this omnibus from North America’s “most redoubtable poet” brings together three previously-published collections : Swimming through the Darkness (1974), Roe Roe Roe Your Boat (1978), and Will You Hold My Breath (1994). The first two volumes capture the unique “piscatorial slant” that would become Choo 3T Fish’s hallmark, with poetry that ranges from deceptively playful versification to darker meditations in “iambic rentameter.” The third volume presents the poet in his later years with a tender collection of erotic poems, many of which are a revelation to readers whose familiarity has never strayed beyond the poet’s traditional canon. Choo 3T Fish is the recipient of numerous accolades including the Thalburg National Poetry Award in 1974 for Swimming through the Darkness, and the Boating Association Truite d’Or in 1980.   ☆   “You cannot understand the arc of the arts in the last-half of the 20th Century without a thorough grounding in the poetry of Choo 3T Fish." (Richard Bledsoe, National Poet Laureate)   ☆   “[Choo 3T Fish is] one of the most determined and inventive decomposers of contemporary American verse.” (Jack Amber, Poetry Now!)   ★  Paperback and digital download   ★  Available Now. 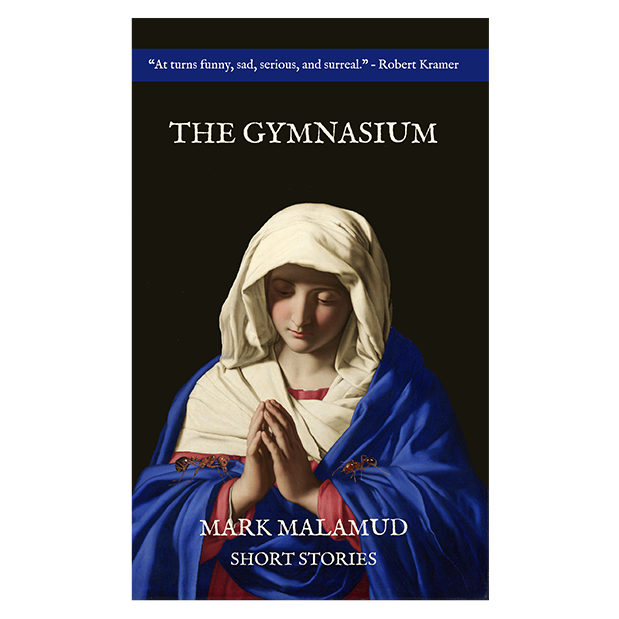 The Gymnasium (Mark Malamud) — A father who searches for his son in Heaven. A rock band whose music is so bad it paralyzes from the waist down. A black-market vegetable genetically-modified for self-abuse. These are just a few of the stories of melancholy and wonder inside The Gymnasium, an exercise in “literary taxidermy” and the inspiration for the Literary Taxidermy Writing Competition. By “re-stuffing” what goes in-between the opening and closing lines of classic works by Milan Kundera, Philip K. Dick, Thomas Wolfe, Ian Fleming, and others, the author has crafted 19 new and wholly-original fictions.   ☆  “The Gymnasium demonstrates re-sampling isn’t just for music.” (re/ART)   ☆  “Imagine taking the opening and closing sentences of Lord of the Flies or Casino Royale, and then crafting your own narrative between their unique starting and ending points. The Gymnasium is an exercise in literary what-if, an alternate reality in which the surprisingly original emerges from the hauntingly familiar." (Henry Beecham)   ☆  “A roller-coaster of styles and voices, all anchored to the simple but powerful idea of re-imagining someone else's words as your own.” (Storybook)   ★  Paperback, digital download, and audiobook   ★  Available Now. 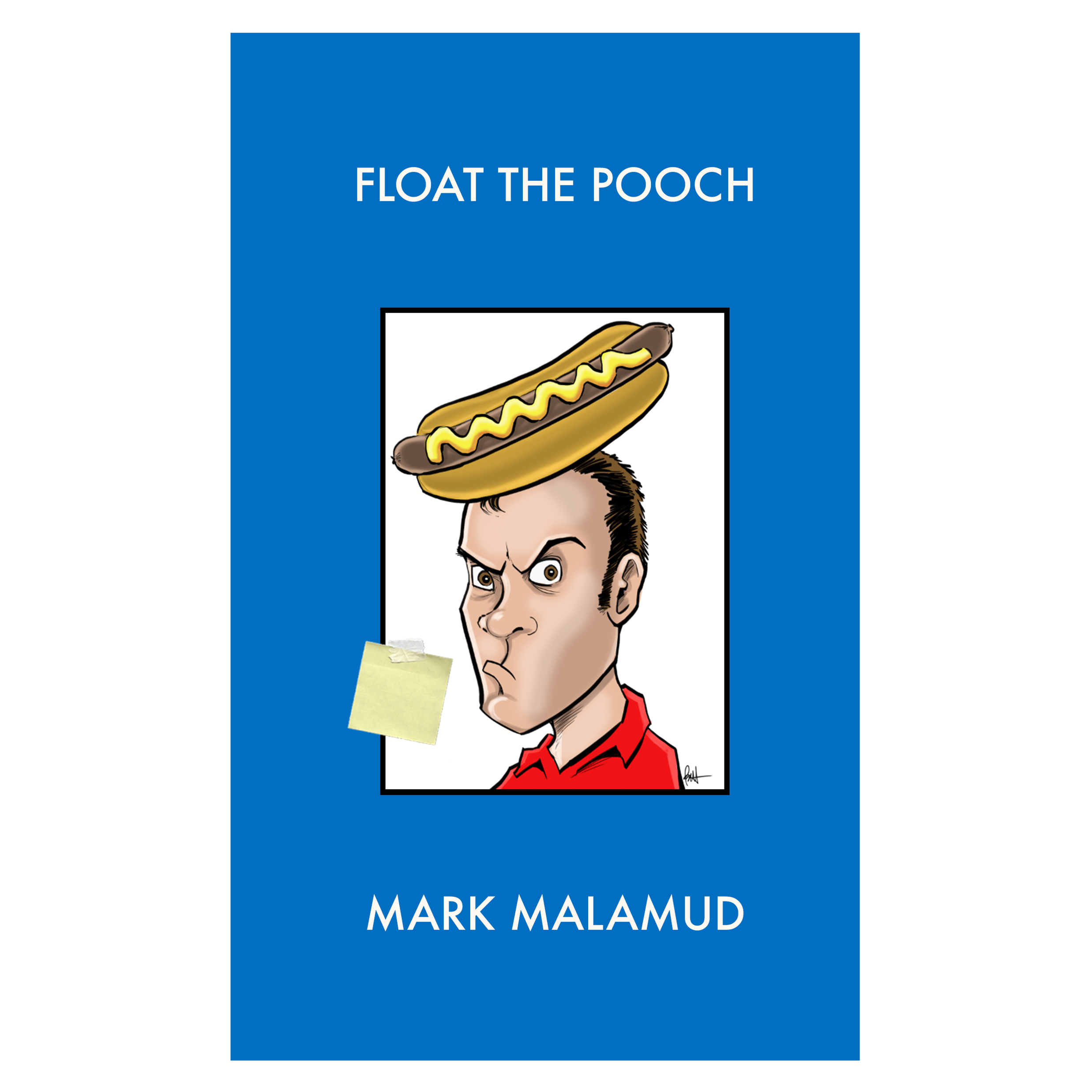 Float the Pooch (Mark Malamud) — Disco Rigido, charismatic kingpin of black-market libidinal software, spreads mayhem throughout the world for the benefit of an ancient extraterrestrial intelligence that uses life on Earth as a substrate for procreation; while Doctor Memory, a back-alley neurosurgeon dressed as a rabbi, tries to save what's left of humanity. Seamlessly interweaving elements of an all-too-real future with mind-bending inventions and hallucinogenic flourishes, Float the Pooch is mesmerizing, hilarious, and utterly original, a novel that twists and turns and folds back on itself.  ☆   "Part science-fiction, part technological thriller, and part hard-boiled Yiddish theatre, Float the Pooch pits sex against life, life against meaning, and — incredibly — David Bowie against Stanley Kubrick." (Tatyana Wjekeslava)   ☆   "America is a corporate state whose cities are crumbling from the inside out, Disney is a religion whose adherents are as likely to wear Mouse ears as they are to terror-bomb Nike stores, and sex — thanks to a new drug of extraterrestrial origin — is the death of us all." (Dean Bonello)   ☆   "The Millennium's first pan-galactic dystopian creation myth!" (Loup)   ☆   "Arch and wry, Float the Pooch reads like a kind of Alien of La Mancha, a quixotic journey of imagination, ambition, and deceit." (Adeline Brown)   ★   Available Now. 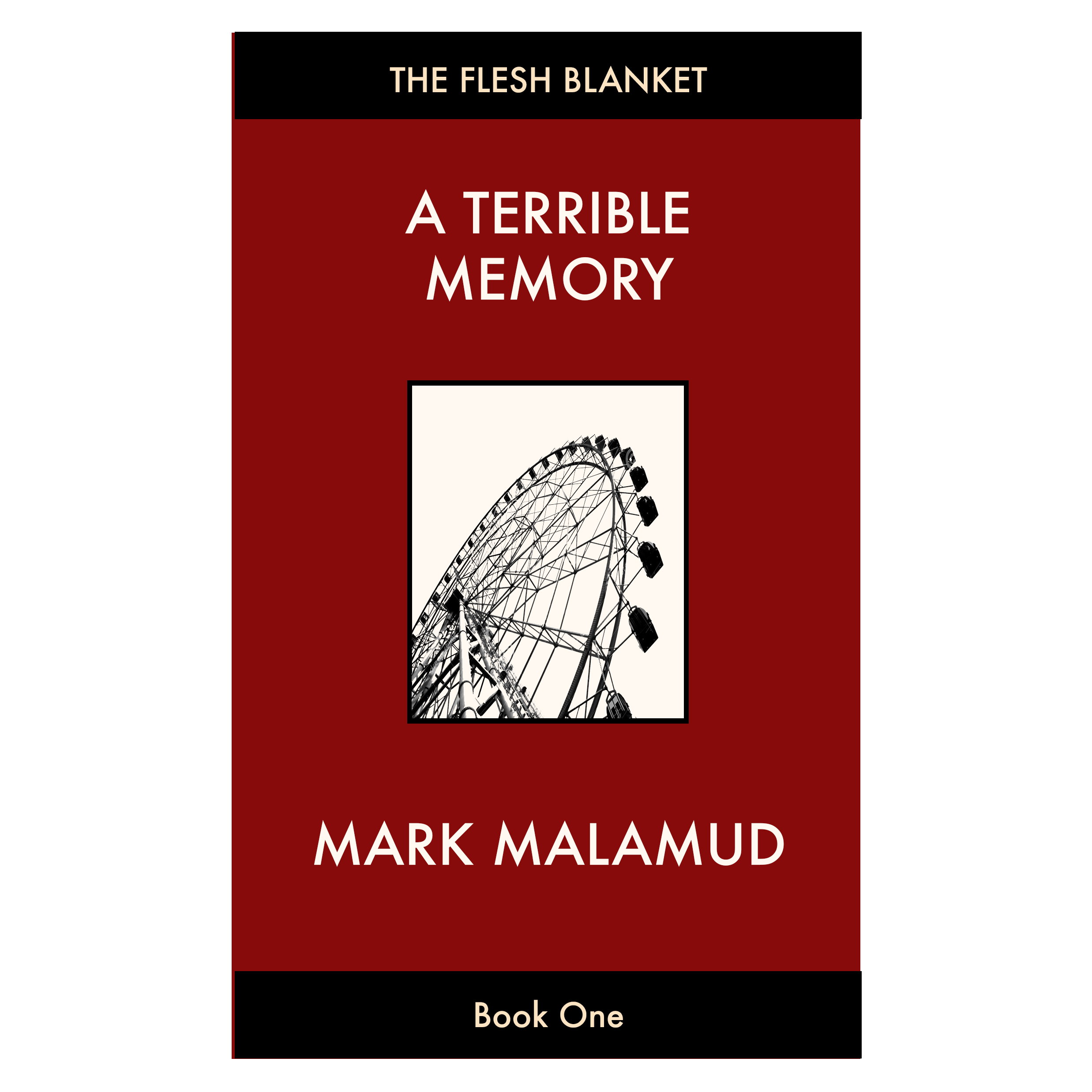 A Terrible Memory (Mark Malamud) — After suffering a nervous breakdown, software developer Richard Bledsoe finds himself alone and living on the streets. Ten years later, still living rough, he's unexpectedly drawn back into the quotidian world when his former boss and mentor, software tycoon Nicholas Stanton, reappears and urges him to help find his missing teenage daughter, Alibi. What follows is a gripping mystery set in the technoir milieu of modern-day Seattle, and an introduction to the world's first homeless detective. A Terrible Memory is the first book in The Flesh Blanket trilogy, three novels set during the early years of the Memory Plague. It is followed by the novels Read Me and The Rectangular Ruins.   ☆   "He told me that toward 1886 he had devised a new system of enumeration and that in a very few days he had gone beyond twenty-four thousand. He had not written it down, for what he once meditated would not be erased. The first stimulus to his work, I believe, had been his discontent with the fact that 'thirty-three Uruguayans' required two symbols and three words, rather than a single word and a single symbol." — Jorge Luis Borges, "Funes el memorioso."   ☆   [Coming in 2022] 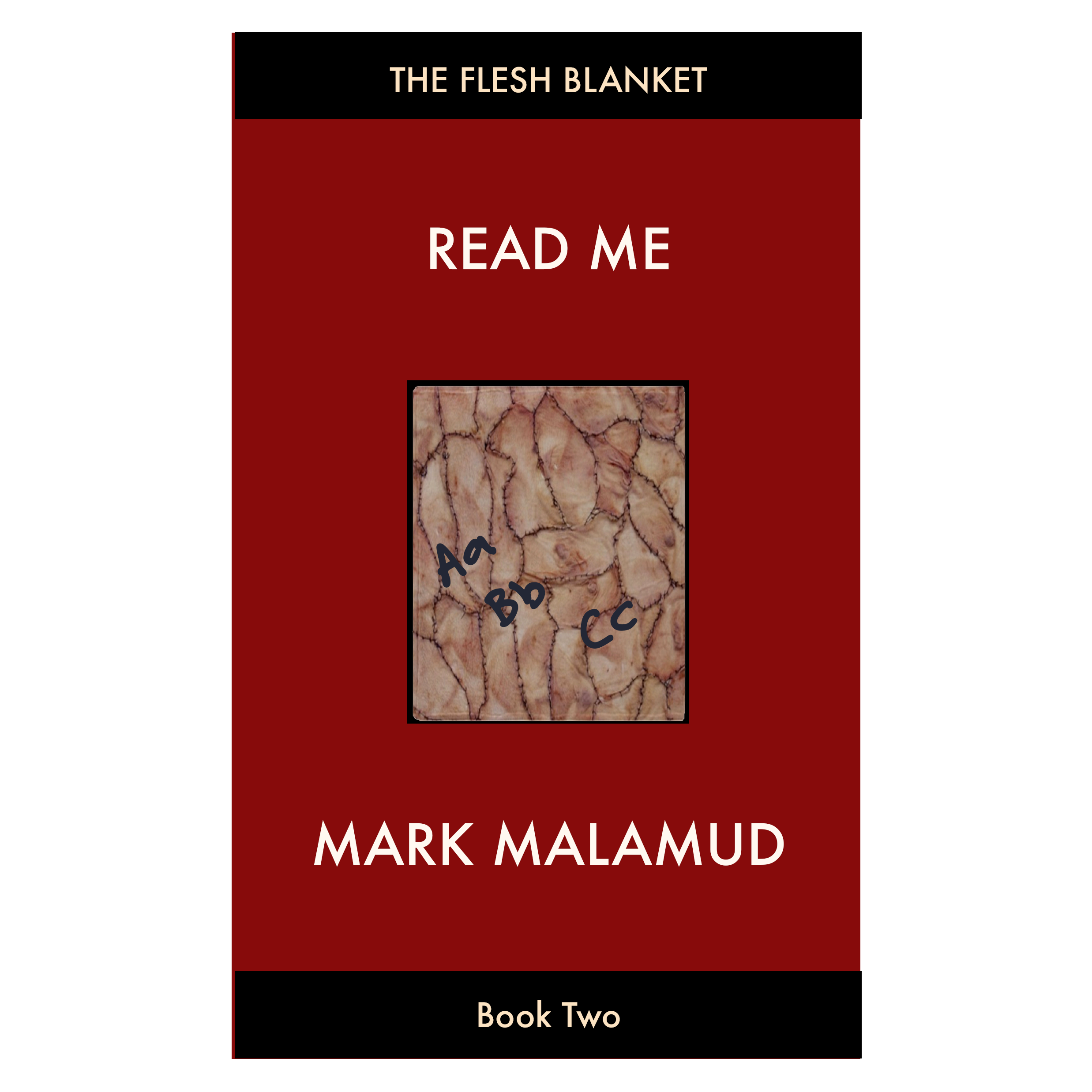 Read Me (Mark Malamud) — Dr. Ireneo Funes, an epidemiologist sent to the Pacific Northwest by the CDC to study the outbreak of a novel disease — one that affects memory — is stymied by the fact that her patients keep disappearing. When chance pairs her with a homeless man (who claims to be a detective), she finds herself on the trail of the disease's first victim, its "Typhoid Mary," Alibi Stanton. Together Funes and Bledsoe uncover the startling origin of the Memory Plague in the high-tech world of Seattle's AI community. What started as a high-tech mystery becomes a science fiction thriller — and a race against time as the disease called Anamnesia spreads across the state. Read Me is the second book in The Flesh Blanket trilogy, three novels set during the early years of the Memory Plague. It is preceded by the novel A Terrible Memory and followed by The Rectangular Ruins.   ☆   "Later he applied his extravagant principle to the other numbers. In place of seven thousand thirteen, he would say (for example) Máximo Perez; in place of seven thousand fourteen, The Train; other numbers were Luis Melián Lafinur, Olimar, Brimstone, Clubs, The Whale, Gas, The Cauldron, Napoleon, Agustín de Vedia. In lieu of five hundred, he would say nine." — Jorge Luis Borges, "Funes el memorioso."   ☆   [Coming in 2023] 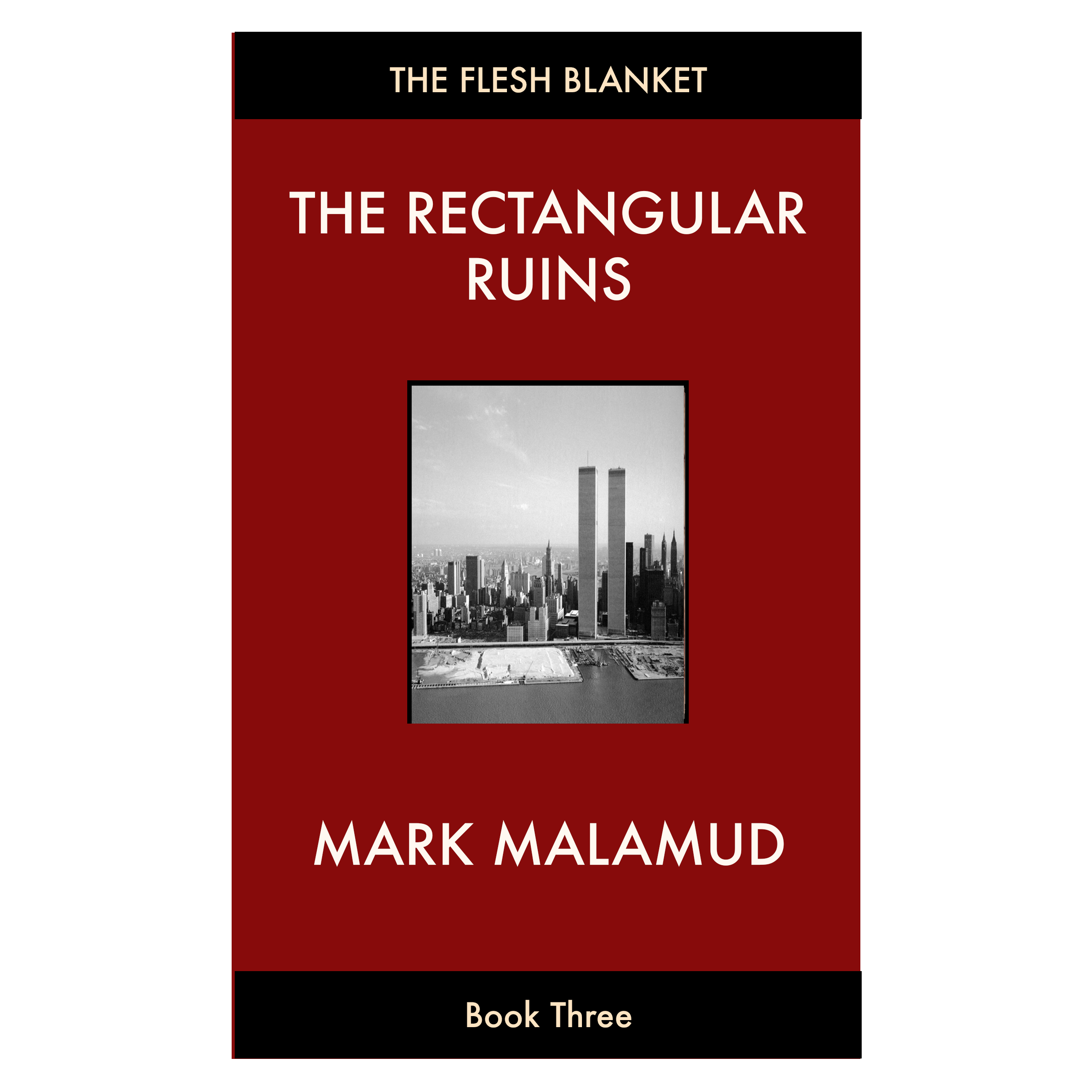 The Rectangular Ruins (Mark Malamud) — The Memory Plague has spread across the United States, completely reshaping the nation. After a terrifying road trip across the midwestern states, Bledsoe and Funes end up in New York City, living in a small encampment in Central Park, surrounded by hundreds of mysterious black boxes – what some call “the mind hives” – that may (or may not) serve as repository of the consciousnesses of all those who have gone missing. The Rectangular Ruins is the third and final book in The Flesh Blanket trilogy, three novels set during the early years of the Memory Plague. It is preceded by A Terrible Memory and Read Me.   ☆   "Each word had a particular sign, a species of mark; the last were very complicated…I attempted to explain that this rhapsody of unconnected terms was precisely the contrary of a system of enumeration. I said that to say three hundred and sixty-five was to say three hundreds, six tens, five units: an analysis which does not exist in such numbers as The Negro Timoteo or The Flesh Blanket. Funes did not understand me, or did not wish to understand me." — Jorge Luis Borges, "Funes el memorioso."   ☆   [Coming in 2024]